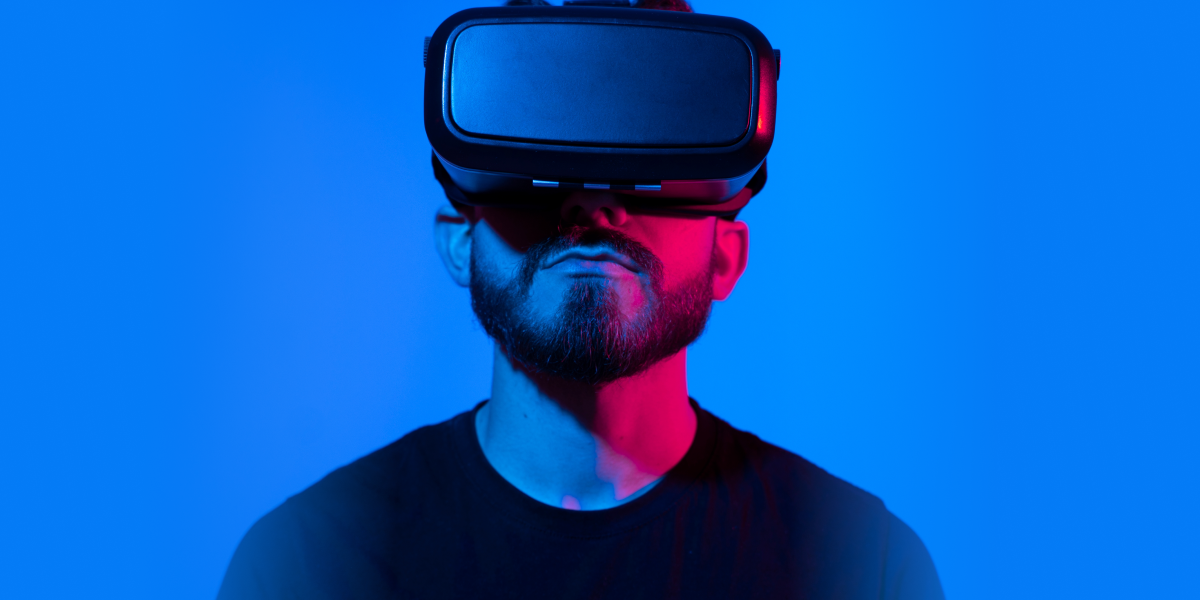 As we approach the end of the year, we look back on what has happened in the crypto markets over the past few weeks. In early November, crypto markets showed a slight pullback after BTC and ETH went from reaching all-time highs of $68.7k and $4.85k, respectively, to testing support levels of $54k and $3.9k, respectively, in 15 days.

In the first week of December, blue chips saw some weakness, with BTC trading downwards, reaching -9.85% (over a 7D performance) and ETH down -1.37%, on the back of risk-off markets and increasing expectations of a near-term rate hike.

In mid-November, markets were spooked by U.S. lawmakers signing the infrastructure bill into law. This bill will require crypto exchanges to notify the IRS directly about crypto transactions. Further, Jeremy Powell’s reappointment as Federal Reserve Chair for a second term reinforces the market view of near-term interest rate tightening. Once the central bank completes its emergency bond-buying program, we can expect to see downward pressure on the returns of riskier assets such as equities and crypto. December continues to be a highly volatile month, as has been the case in prior years. Equities and crypto are seeing a sell-off on the back of lingering fears around the new “Omicron” CV19 variant and NFP (Non-farming payrolls) data in the U.S., which showed a higher than expected unemployment rate drop, making a case for an interest rate hike by the Fed.

BTC volatility markets expected higher market movements as options IV (implied) traded at a 20% premium over the later realized volatility of BTC, around 60%. Seven-day options and three-month options traded between 80% to 90% IV. Institutions pushed the Layer 1 narrative primarily around SOL and DOT, seeing high realized volatility up to 100% and 106%, respectively.

(Implied volatility is the options market's forecast of a likely movement in a security's price, whereas realized volatility (also known as historical volatility) is the actual price fluctuation of an asset and is measured in standard deviation terms) 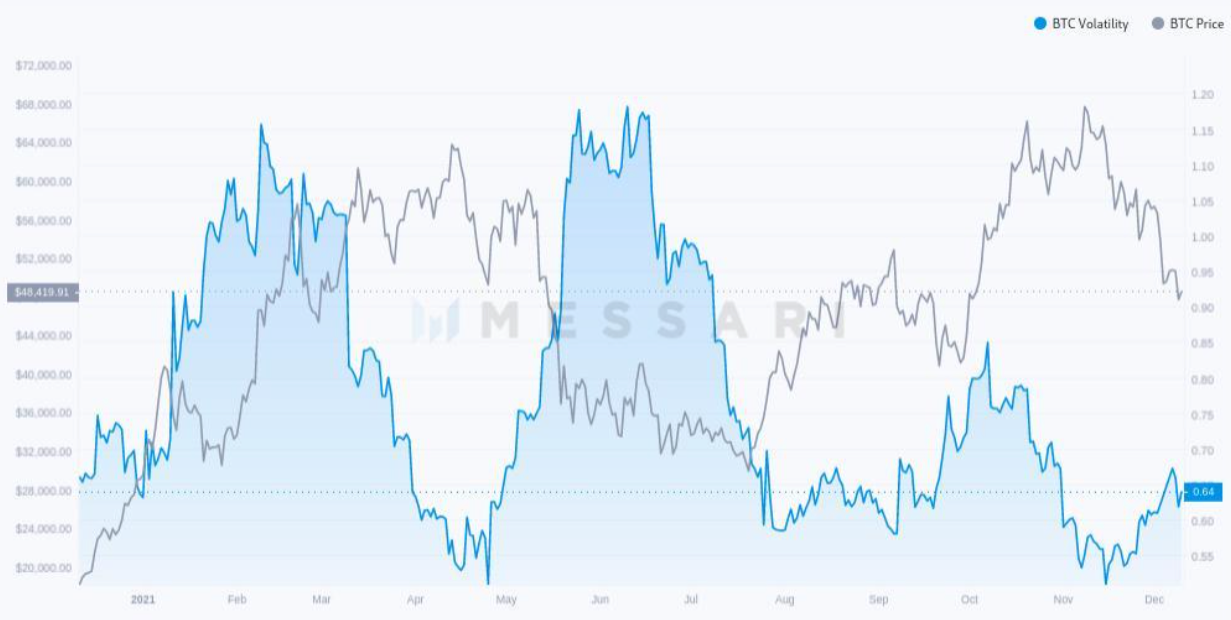 Total Value Locked across all blockchains 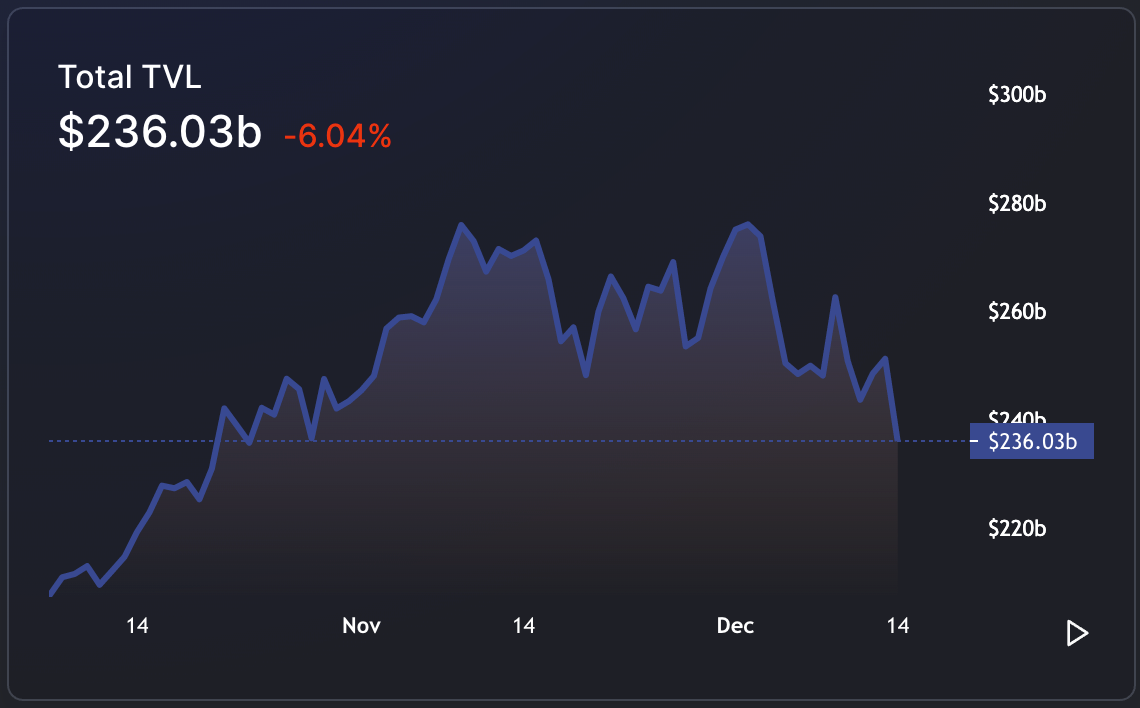 Lastly, social media analytics have shown a spike in social engagement flow led by XTZ with 106 million, LINK with 57 million, and DUSK with 6 million.

Theme of the month: Metaverse

Metaverse and gaming tokens continue to be the hottest trades this year, with four tokens in the top 10 highest gainers in 2021, led by GALA with 48,745% (YTD) in overall best performance in crypto markets, Axie Infinity (AXS) with 17,524%, and SAND with 14,062%. Monthly outperformance in November was led by SAND (320%) and RFOX (285%). December, however, has been sluggish for crypto, similarly impacting the Metaverse tokens mentioned above, although performance has remained resilient.

Facebook’s announcement of their rebrand accelerated this rise of the Metaverse token sector to “Meta” and plans for developing the software side of the industry by building out their version of the metaverse while funding hardware development (V.R.) via Oculus, which they own. 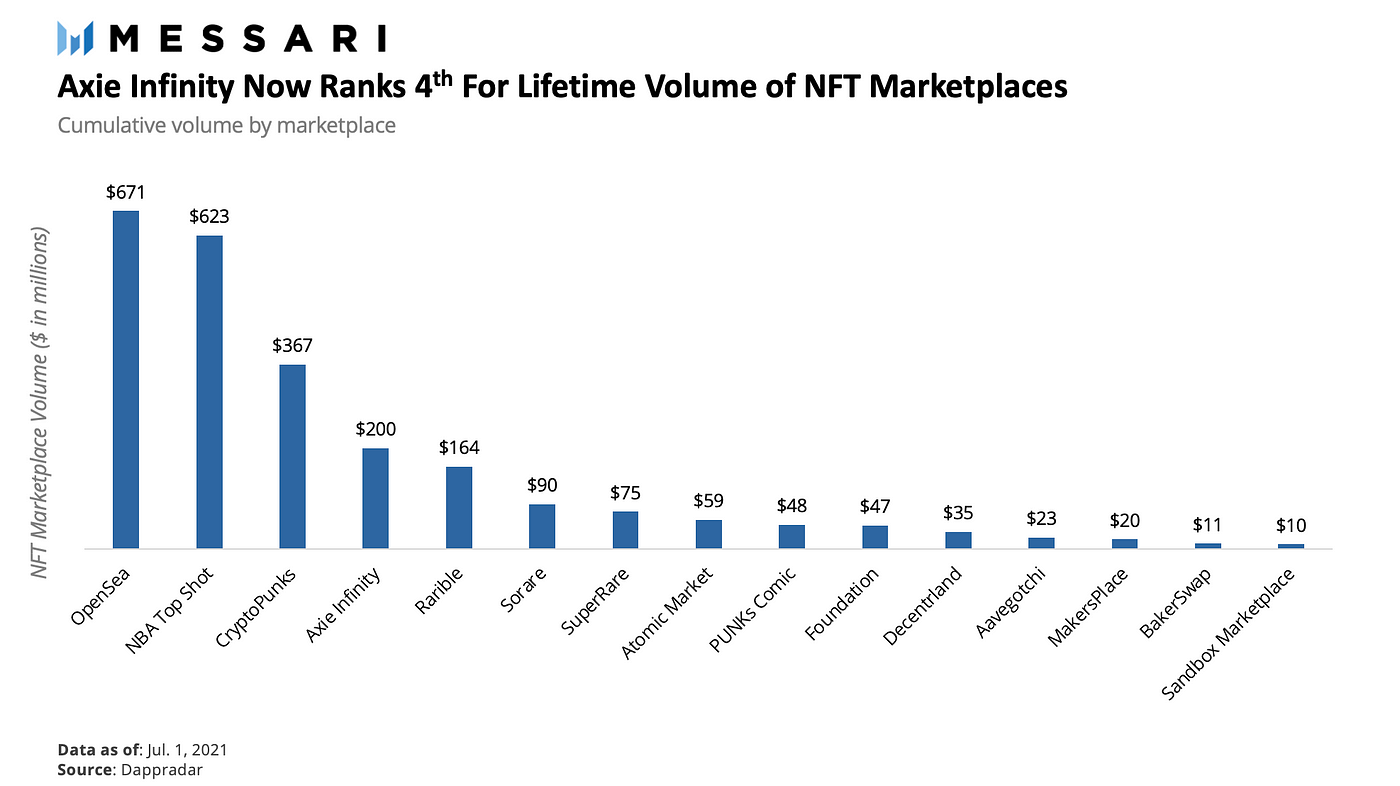 The play-to-earn (P2E) revolution started by Axie Infinity continues, as the platform leads the industry in the number of active users with over 2 million, as well as total revenues compared to protocols with $590.5m in revenue in 2021, positioning itself above the likes of OpenSea, Uniswap, Pancakeswap, and dYdX. The growth of this platform can also be measured by the lifetime volume of NFT marketplaces, which places it 4th with $200 million in volume, behind OpenSea, NBA Top Shot, and Cryptopunks. 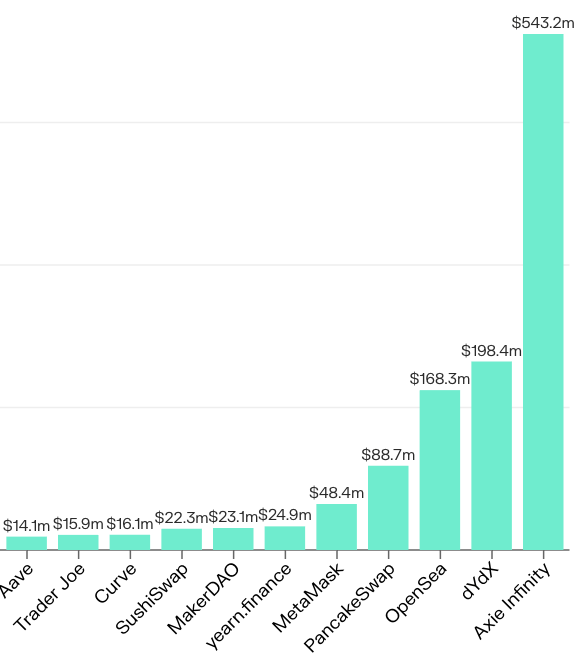 Furthermore, this market has played another big role in decentralizing finance and access to financial services to millions of unbanked people in developing countries. The play-to-earn model has also allowed millions of people from Venezuela, the Philippines, Indonesia, Vietnam, and many other developing countries to earn a living above their local minimum wages. The creation of a robust digital economy has caught the attention of institutional investors, which have focused on developing play-to-earn models via gaming guilds such as YGG, CGU, or Avocado Guild. These “guilds” are community or privately owned gamer clans, which support the education and funding of new players to participate in the play-to-earn ecosystems and provide salaries to the members of their communities.

Many believe that the metaverse has been one of the most revolutionary aspects of crypto since DeFi 1.0. Its progress reflects what Satoshi Nakamoto put forth in his Bitcoin whitepaper circa October 31, 2008: the increasing decentralization of wealth creation and access to finance. Play-to-earn, Meta, the Oasis, Matrix — however you’d like to call it, is here to stay.